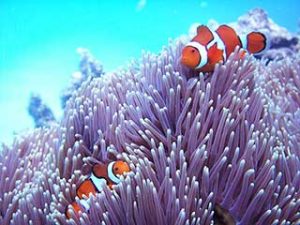 The first conclusive evidence that no-take reserves can help restock or replenish exploited fish populations on neighboring reefs was detected in Australia’s Great Barrier Reef. Currently, the Great Barrier Marine Park protects over 1/3 of its coral reefs from fishing and other extractive activities. A new study from James Cook University in Australia used DNA fingerprinting techniques to track the movement of baby fishes to see whether protected areas can replenish areas open to fishing. The researchers found that a very large proportion (65%) of juvenile coral trout and snapper tagged inside the marine reserves settled in nearby areas open to fishing. Most of the baby fish settled within one-five kilometers of the reserves, but a significant proportion dispersed 10 kilometers or more to find a new home.

In addition, the study found that the six no-take marine reserves, which cover only 28% of the total reef area, produce 50% of the juvenile fish – showing that if the marine reserves weren’t established, there would be a lot less fish on the reefs.

Importantly, these benefits accrued from relatively small no-take reserves; some were as small as 800 meters to two kilometers across. This is really great news for local fishing communities around the world because protecting small areas can clearly provide fisheries benefits.

As the Director of the Marine and Coastal Resource Management in Australia, Leanne Fernandes, has said “The implications for the local fishing communities around the world are huge. It’s never easy to protect areas from fishing because, so often, the fished areas are very important for local communities for food, livelihoods, and lifestyles. So fishermen need to know for sure it will work.” This new study shows that indeed, no-take marine reserves can work.