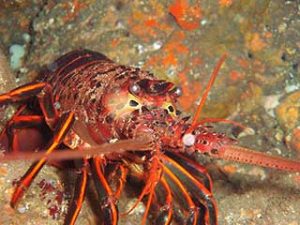 This is important because sea urchins eat kelp and without top predators, such as sea otters or spiny lobsters, to keep the sea urchin population in check, they flourish and decimate kelp forests. Scientists estimate that 75 percent of the kelp forests that used to blanket the ocean floor along California are gone. Losing a section of kelp forest is very similar to cutting trees and losing forest areas on land, both serve as important habitat to hundreds of animals. An estimated 800 marine species rely on the kelp forest for some part of their lifecycle. 1

Lobster populations have dwindled in southern California since the onset of both commercial and recreational fisheries in the late nineteenth century. Not only the number, but the average size and lifespan of lobsters have declined considerably. This has put the entire kelp forest ecosystem at risk. Underwater parks offer a piece of the solution by helping protect species like the California spiny lobster by offering a safe haven for breeding and feeding in surf grass beds.

In a recent study from the Channel Islands, where marine protected areas have been in place for 10 years, researchers found larger and more abundant lobsters inside protected areas. In contrast, nearby fished areas had fewer, smaller lobsters. While trophy lobsters (or extremely large, fecund lobsters) are becoming scarce throughout California, they are able to flourish and mature inside protected areas. Researchers tagged lobsters inside the protected areas, and tracked them outside in areas open to fishing. This means that underwater parks not only offer a conservation benefit to lobster, but that fishermen can also enjoy the benefits of protection by being able to catch them as they move outside the boundaries of protection. These findings show promise for southern California’s kelp forest ecosystem.