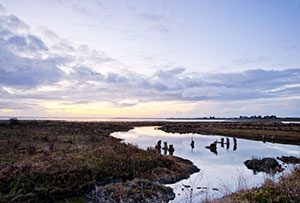 The South Humboldt Bay State Marine Recreational Management Area spans a small area of the Humboldt Bay. Its western border lies against the contours of the inner South Spit. Humboldt Bay is California’s second largest natural bay and is a nationally significant area for migratory birds. Most of the ecology is characterized by intertidal mudflats, and eelgrass beds that host a diversity of species both above and underwater.