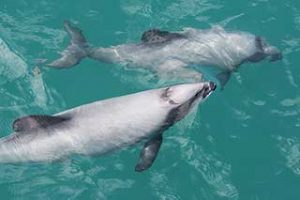 While marine protected areas have long been used as a means to safeguard species of fish and invertebrates with small home ranges, their benefits to more mobile species like whales, dolphins, sharks and tuna are less well known. However, scientists in New Zealand have shown for the first time that marine protected areas actually can benefit marine mammals. The study, which was based on 21 years of monitoring, revealed that a marine sanctuary has significantly improved the survival of Hector’s dolphins, one of the most rare dolphins of the world.

Covering an area of 1170 km2 off of New Zealand’s South Island, Banks Peninsula Marine Mammal Sanctuary was designated in 1988 to prevent dolphins being killed by gillnet and trawl fisheries. Between 1986 and 2006, researchers conducted photo identification surveys of Hector’s dolphins to monitor their survival from year to year. Since the marine protected area was designated, the dolphin’s survival has increased by 5.4%. According to Dr Liz Slooten of the University of Otago, “This study provides the first empirical evidence that Marine Protected Areas are effective in protecting threatened marine mammals.”

Photo copyright Tony Neighbours
Long advocated as a way of protecting threatened marine mammals, this study shows unequivocaly that marine protected areas actually do work, particularly if they are large enough to encompass the animals’ home range. The take home message is that size matters: marine protected areas work, but they have to be large enough to be effective.