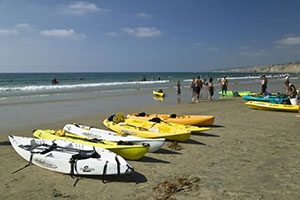 Along the coast of San Diego there are two adjoining marine protected areas: San Diego-Scripps Coastal Marine Conservation Area and Matlahuayl State Marine Reserve. Together, these picturesque bodies of water span about 2 and ½ miles and can be seen from the shores of La Jolla Cove, a popular tourist destination for many. This impressive array of rocky reef and kelp forest habitats is considered to be the most extensive and biodiverse of the region.