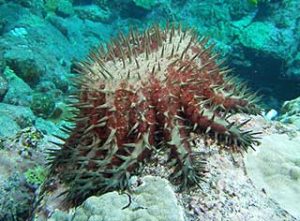 Fishing bans set up to protect Australia’s Great Barrier Reef are having an unexpected impact on one of its most devastating predators. According to researchers, outbreaks of large, predatory, crown-of-thorns starfish are higher in areas where commercial fishing is allowed than in protected no-take areas.

With up to 20 arms covered in extremely sharp, toxic spines, the crown-of-thorns starfish are one of the greatest natural threats to coral populations. When outbreaks occur, thousands of starfish blanket the coral reef’s surface. “The living coral typically covers about 20 percent of reefs of the Great Barrier Reef. That figure drops to about 5 percent after an outbreak,” said Hugh Sweatman of the Australian Institute of Marine Science. Eventually, the starfish die of starvation and disease, but their larvae are carried by currents to nearby reefs where more outbreaks are likely to occur.

The study compared the frequency of outbreaks on reefs within marine reserves to reefs that were open to fishing on the Great Barrier Reef. The results showed that the frequency of outbreaks on reefs that were open to fishing was 3.75 times higher than on no-take reefs in the mid-shelf region, where most outbreaks occur, and 7 times greater on all open reefs. “This study provides an additional argument for establishment of marine protected areas, as refuges from exploitation and other threats and as sources for recolonization of damaged reefs to increase ecological resilience,” said Sweatman.
Although Sweatman does not believe that exploited fish species are significant predators of starfish, he suggests that there might be a “trophic cascade” where increased numbers of exploited fishes, many of which are carnivores, cause a decline in small predatory fishes that favor larger invertebrates. He speculates that those invertebrates may prey on the starfish when they are very small and keep their populations in check.