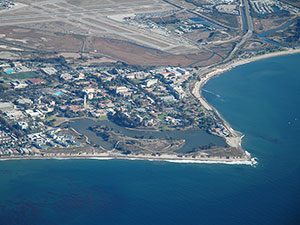 The Campus Point State Marine Conservation Area’s protected waters extend right up to the beach. This marine protected area is known for the many habitat types encompassed within its boundaries and for its close proximity to the UC Santa Barbara campus. From rocky shorelines to sandy beaches and kelp forests to oil seeps, this 10.5 square mile protected zone provides a safe sanctuary to a wide array of species that are representative of the southern California coastline.